This sleek, scaled draconic creature looks both regal and intelligent. A leather harness holds a saddle between its wings. 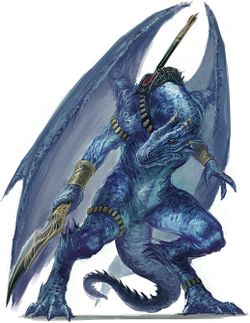 Special Abilities
Rider Bond (Su)
A dragonkin can form a magical bond with its rider that lasts until death. Forming this bond requires a special ritual that takes 1 hour. Once a dragonkin forms this bond, it can’t form another rider bond until its current rider dies. A dragonkin and its bonded rider can communicate with each other as if they both had telepathy with a range of 100 feet. When a rider is mounted on his dragonkin at the start of combat, both creatures roll initiative separately and treat the highest result as their single result.

A dragonkin’s breath weapon is based on their color or type, much like their larger true dragon cousins. Thus a red dragonkin will have a fire breath weapon while a blue will be an electrical breath weapon and a green will be a poison cloud, etc.