Triaxus, is the seventh planet in Golarion’s solar system. Because of its eccentric orbit, it is often referred to as The Wanderer. Due to the variation in the orbit, Triaxus is effectively two distinct planets as the orbits create seasons which last for generations vice years. At its farthest point, far past the great gas giants, Triaxus is covered by glaciers, endless snow fields and savage predators. At its closest point, it rivals steamy Castrovel for how close Triaxus approaches the center of the solar system, transforming it into a world of vibrant forests, rushing rivers and fertile earth teeming with abundant life. Because of this extreme shift in seasons, Triaxus has two very distinct and very different ecologies. Its current place in the heavens will determine which is the dormant season and which is active. Currently, Triaxus is in its winter cycle. 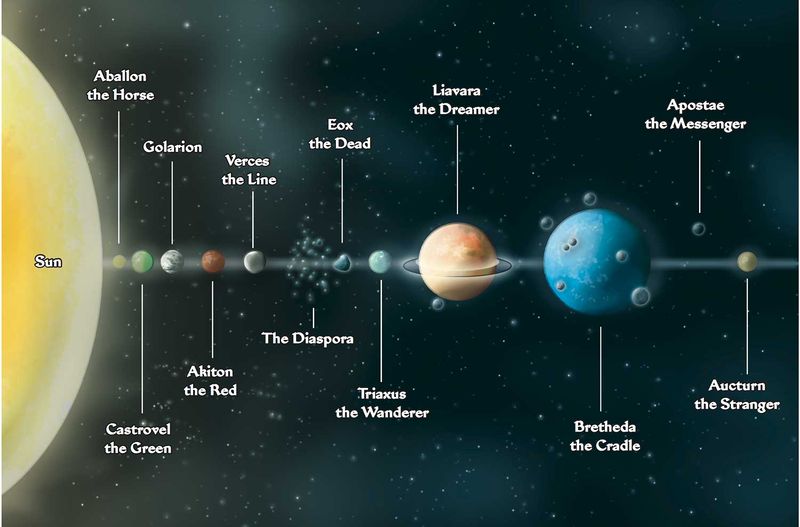 Triaxus is called the Wanderer because of its irregular and eccentric orbit. It is known for being two different worlds depending on its distance from the sun. These diverse swings in climate create two distinctive evolutioinary forms of humanity. When Triaxus is at its farpoint from the sun, its inhabitants are born with a fur-coated skin to provide added warmth to survive the centuries of bitterly freezing temperatures. Those born at its closest are a pinkish-flesh covered as perceived as “normal” as compared to Golarion. Due to these variances in appearance Triaxians are referred to as “Winterborn” or “Summerborn” depending on appearance although they are identical in abilities in every other way.